Running the marathon that is my life...

So, it's been a while since I've posted. So much has happened- none of it a surprise. I just overplanned myself, that's all...
I considered calling this post "running the gauntlet that is my life" but then I looked up "running the gauntlet" and found that it was just too gruesome to describe something that has been so enjoyable.
Turning 40 and the 80s Dance Partay
The photos really say it all: 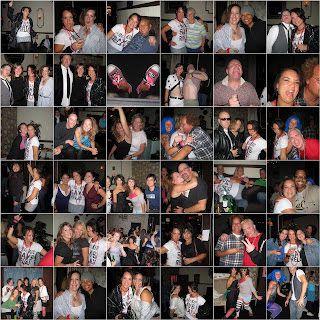 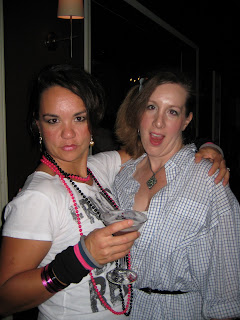 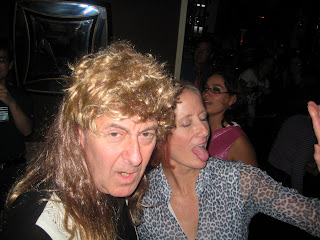 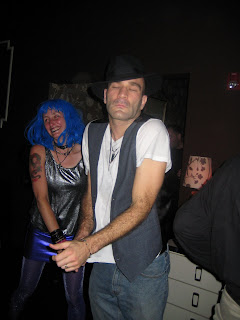 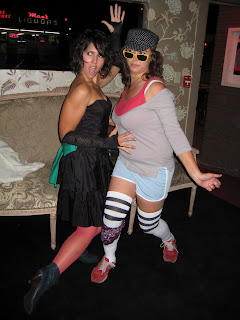 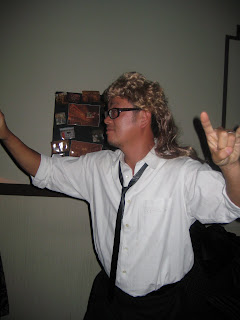 It was so great to have so many friends from all different parts of my life there. There were grad school folks, family, old friends (yes! folks who knew me in the 80s), folks I work with, folks I used to work with, neighbors... ALL FRIENDS, of course! We had a great time and DH and I didn't get to bed until 3:30am! (Geez, how long has it been since we've seen 3:30am?)
Do I feel 40? I have no idea what that means, since I haven't ever been 40... I've had to get reading glasses, and sure, I have a few more aches and pains, and yeah, it's STILL tough to get rid of that spare tire around my waist, but so far, so good... Is 40 the new 30? Sure, why not?

Disneyland on my actual 40th birthday...
My whole famn damily was at Disneyland for my 40th bday weekend. In all honesty, our excuse was not my birthday, but Thing 2's successful potty training! Yippee! WARNING: MAMATALK AHEAD. He's still wearing a diaper at nap and at night, but he's a regular potty user and has even attempted to wipe himself after going #2.
Hey, any excuse for visiting the Happiest Place on Earth.
The place was all decorated for Halloween and we had a GREAT TIME! Some highlights:
The Nike Women's Marathon

Hey, when your life is a marathon, what's a 26.2 mile jog?
My friend Kristin and I arrived at the starting line around 6:30am, ready to run like girls with 20,000 other women and men (mostly women, as you could guess.) The atmosphere was much like the 3Day, except boiled down to one day with a loooooooong run instead of a looooong walk. There was loud music, lots of bright lights, dignitaries (SF Police and Fire Chiefs- both women), radio announcers, and A LOT of purple and green (Team in Training.) This was a HUGE TnT event, especially since the whole event was a benefit for leukemia/lymphoma.
I had to take a photo of this woman, who obviously hadn't lost sight of the carrot at the end of the stick: 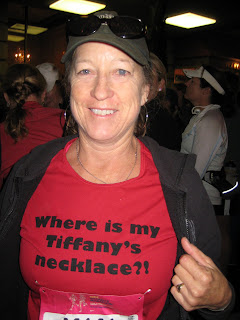 It was COLD, something we were thankful and ready for. It was EARLY, something we are also used to (we start almost all of our training runs before 6am.) And as for my tackling 26.2 miles, I knew I could handle it physically, I was just worried about the mental game.
We crossed the starting line at about 7:20am with a TON of people. 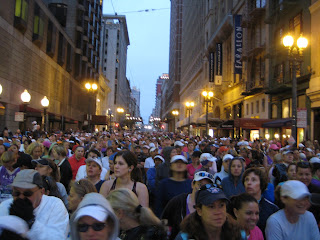 Our first couple of miles were at a much slower pace than we are used to, but it was a good thing that we were FORCED to take it easy in the beginning. We ran through the Financial District, along the water, past Pier 39 and through Fisherman's Wharf. There was music along the way, including this gospel choir and a full Scottish band ('scuse the camerawork... I was running like a girl) 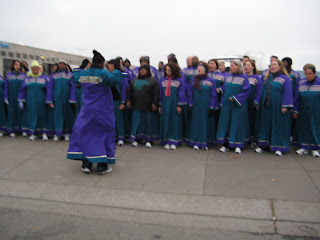 The hills were killers, especially the one coming out of Crissy Field and going up through the Presidio. It just never ended. Kristin kept saying, "This is our Spruce"- a long, steep hill in Berkeley that we ran several times during training. Yeah, Spruce x 10. But we made it, and we made it down the hill at the Cliff House, too. Around that time, I realized that Kristin was almost done (she was doing the half marathon) and I was about to be the lone r'alker (run-walker.) When the time did come, I was bummed, really bummed, especially because she peeled off during the uphill in Golden Gate Park, yet another hill that felt like it would never end...
I managed to keep going with our run 5 minutes, walk 1 minute plan, and was pretty consistent with a 12-minute mile pace. At mile 25, I hit a wall, so to speak. My body didn't want to run anymore, but luckily, it didn't want to stop, and why when I was so close. I walked for a mile, then managed to run for the final .2 of a mile (gotta come in running, right?) I was greeted by a bevy of HOT firefighters in tuxedos with platters full of Tiffany boxes. Inside? Possibly the coolest finishers' medal EVAH:

So, I've done my first and ONLY marathon. I can cross it off my bucket list. It was great, but I think I'll do halfs from now on. It's not that I was hurting all the following week. It's not that it was a horrible experience. It's just that the training takes A LOT of time.
Oh, but it was SO worth it...
And now...
I'm sitting here, it's almost noon, and I'm still in my jammies. It's been a great weekend. No school, no other extra-curricular activities. Just me. Basking in the glow of finishing running this gauntlet that is my life.
Coming soon...
The pain that is a Leadership Action Research Project.
Posted by Unknown at 9:43 AM

Man oh man! You certainly HAVE been busy!

Happy belated birthday. Congrats on the marathon. And YAY for Disney.