My Version of Wyeth's "Christina's World"

2 great iPhotos
Originally uploaded by trumom
OK, sorta. Took this of Thing 2 at Point Isabel, a/k/a the dog park with the most incredible view... no lie.
Posted by Unknown at 6:56 PM No comments:

Photo 78.jpg
Originally uploaded by trumom
Well, it's here, the first prize for the Breast Friends Ravelry Raffle: 10 gorgeous skeins of Mmmmmalabrigo (my fave yarn.) The happiness I felt was tempered only by the news that Malabrigo had a fire recently... Here's hoping they are back on their soft, squishy, vinegar-smellin' feet in no time! I cannot imagine a world without Mmmmmal.

Wait, tell me more about this raffle, you implore... Here goes:

I am walking the Breast Cancer 3-Day which benefits Susan G. Komen for the Cure. To reach my $4,000 goal, I'm holding a BREAST FRIEND RAVELRY RAFFLE!

There is a FABULOUS PRIZE PACKAGE, which includes donations from:
Malabrigo
10 skeins of MMMMMMMal goodness! Six skeins of worsted (2 each of 3 different colors), 2 skeins of light greenish-blue organic cotton, 2 skeins of a GORGEOUS green (labeled "test color") of the kettle-dyed superwash merino sock yarn

WEBS
Valley Yarns and a pattern!

Jenny Hurth
a FABULOUS bag (that is earth-friendly, too!)

TO ENTER
Visit my 3-Day website and make a donation then PM me on Ravelry or e-mail me with your REAL NAME and the amount you donated. Every $5 increment= one entry, so the more you donate, the better your chance of WINNING! Does your employer match? If so, their match will count toward your entries- just make sure they make a note with your name when donating!

You can also enter by Tell-A-Friend
1) Tell friends/others about the raffle.
2) When they PM/e-mail me, they tell me who sent them.
3) You get one entry for every friend you tell who donates!
Easy, huh?

If you are in the SF Bay Area and are interested in walking the 3-Day and raising money for this worthy cause, please PM me and I'll do my best to recruit you for my team!
Posted by Unknown at 9:48 PM No comments:

IMG_5404.JPG
Originally uploaded by trumom
My sweet peas... just a note, when Annie's Annuals sez it reseeds, they ain't kiddin'!
Posted by Unknown at 11:12 AM No comments:

Memorial Day... or, how I'm taking back MY country, dammit!

So, what does it mean to you? To many it means a 3 day weekend, the beginning of summer, or when they can start wearing those white shoes. There are many a barbecue today...
Today, I will fly our American flag outside our house. No, I don't agree with what is going on in Iraq and Afghanistan. And no, I don't agree most of the time with our government. I am not giving up the enduring symbols of MY country that easily.
I was born and raised here. As a child, I spent my summers in middle America, going to church on Sundays and eating casseroles. I am bi-racial, and have felt the sting of that on occasion. I work in an extremely poor area and hear gunshots on a regular basis. I have experienced both good and bad as an American, here and abroad.
So today, I fly my flag. It, and everything it stands for, belongs to me. I ain't giving it up.
Posted by Unknown at 8:30 AM 1 comment:

Well, I've started my program, sort of. We had a pre-seminar around vocabulary for our program tonight, and it was the first we had as a class, so I met the rest of my cohort... here they were, the folks I would be spending the next 14 months+ together with. For better or for worse, in sickness and in health, for poorer and, well, that's about it. We are, after all, educators.
This group of almost 40 edu-geeks was quite mixed. Although I'm not the oldest person in the cohort (I'm assuming this), I'm not the youngest by far, and I'm probably in the older group. There are plenty of dads of younger kids. As far as I could tell, I am the only mom of younger kids (there is another mom in the group, but her kids are teenagers, which, of course, comes with its own issues.) There were some women in there who have partners with children. OK, and why am I focusing in on the women? Because, where I come from (my house, the house I grew up in), mom does most of the housework and childrearing. Sorry, but that's the truth from where I see it. So, I look at these dads in the class and think, "Yu
p, mom's at home watching the kids and when you get home all you'll have to do is... whatever. When I get home, there will be dirty dishes, laundry to be folded, meals to be planned..." (OK, right now, I'm obviously not doing those, but that doesn't mean they're not there. THEY MOST DEFINITELY ARE.) DH has told me to get stuff organized so he can do more. OK, I'll do that. We'll see if they get done. I'll remain positive, I swear.
Other things I noticed/learned:
Some other biz:
The fantastic combination of fundraising and knitting are coming to a major culmination. I'm going to hold a raffle on Ravelry and, so far, I have the following folks signed on to donate prizes:
I've also contacted Lorna's Laces, Jimmy Beans, and Casey and Jess for something from the Rav store (that's a long shot, I know, cuz I know they don't have much stock right now.) I'm planning to contact Jenny Hurth, eat.sleep.knit, and Entrez in Oakland. Thinking of getting a t-shirt from Kingman so that the winner can feel like an honorary Poison Ivy Knitter.
I received a fab Mmmmmalabrigo swap package from Riprap... two beautiful skeins of chunky in Hummingbird...I love them... so much so, I did my best Princess Leia look in appreciation: 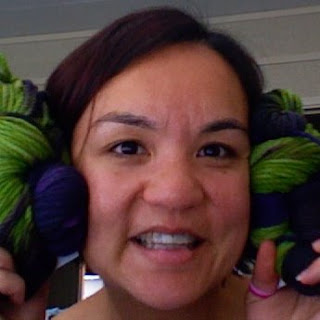 Cute, huh? I turned it into my Ravatar (which says "May the Malabrigo be with you." above me) and got SO MANY positive reactions to it, I think I'll keep it for awhile...
I am eagerly awaiting my swap partner's return from vaca. Her package is waiting for her... I created a magic yarn ball... it was a blast putting it together.
Posted by Unknown at 10:17 PM No comments:

Dare I say it? MORE COWBELL! 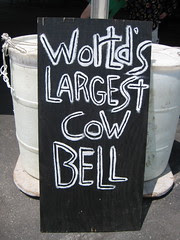 Maker Faire- May 3, 2008
Originally uploaded by trumom
OK, so I've been trying and trying to get to a blog that sounds somewhat together about the Maker Faire (the fair with an "e") and I swear it will happen...
Posted by Unknown at 11:03 PM No comments: